"A Day on Set with Justin Lin" Featurette

By watching “A Day on Set with Justin Lin” in our “Featurettes” section, viewers can follow a day in the life of Justin Lin, the director of F9: The Fast Saga. See what Lin’s typical day looks like from start to finish—including the director’s breakfast routine before a long day on the set of F9: The Fast Saga. After breaking the fast necessitated by three hours of sleep most nights, Lin heads down to the Fast & Furious set, always excited about what the day has in store.

As Lin explains, his team is filming at three different locations across the world. That means trust and communication are key to ensuring the shooting process runs smoothly. As soon as Lin sets foot on set, not only must he communicate with his global team, but he must also handle the many on-site facets of the filmmaking process. One minute he might be having a conversation about costuming and the next giving notes to the art department. Whether he’s planning the F9: The Fast Saga trailer or clearly conveying intentions to the actors, it’s Lin’s job to handle it all.

One of Lin’s biggest ambitions with the shooting of F9: The Fast Saga was to ensure every dollar spent is evident in the final product. In his philosophy, if the viewers and fans aren’t reaping the rewards, it wasn’t money well spent. From the first vision to the film’s release, Lin stresses that everything that goes into the film is for the fans.

Although shooting F9: The Fast Saga was strenuous work for Lin and everyone else involved in production, at the end of the day, Lin insists it’s an enjoyable process. “Production is fun because… even though it’s hard hours, if you have the right group of people, nothing beats it. You’re not alone.”

According to the actors on the F9: The Fast Saga set, Lin is a truly memorable director to work with, especially when it comes to the amount of dedication and effort he puts into his work. He’s a director that refuses to relax and enjoy downtime on set—the perfect kind of work ethic to have when you’re directing a fast-paced film like F9: The Fast Saga. There’s no time for slacking off. 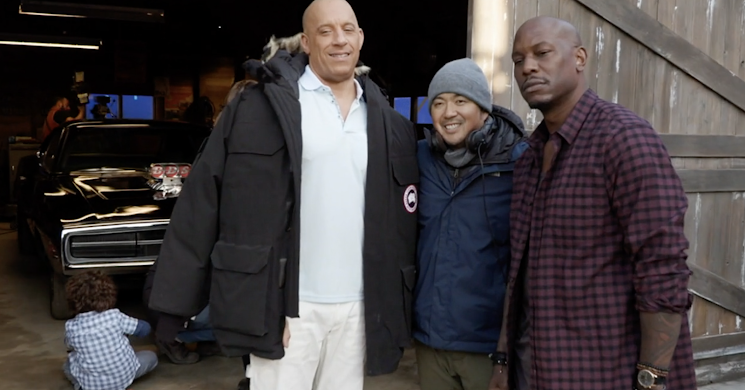 To make a great film, Lin believes the relationships built among the cast and crew are essential. If this bond isn’t strong, communication is stilted—as a result, it’s impossible to convey the director’s and actors’ visions on the big screen. That’s why Lin is such a remarkable director. According to everyone he interacts with on set, Lin listens to the feedback and commentary of everyone he works with. Then, he takes their input into account and puts in the work to keep these person-to-person relationships strong.

Overall, the F9: The Fast Saga behind-the-scenes interview gives us an interesting peek into the making of the movie as well as director Justin Lin’s philosophy.

Want to learn more about Justin Lin and what it’s like on the set of F9: The Fast Saga? Check out the array of F9: The Fast Saga features made available by Universal Pictures Home Entertainment. If you’re a fan of the franchise, don't miss out on all the other exciting F9: The Fast Saga extras when you buy the movie on 4k Ultra HD, DVD, Digital, or Blu-rayTM*.