From the camerawork to the choreography, making an action set piece for any film can prove to be quite the undertaking. The same can be said for all the chase and fighting sequences performed specifically for the film, Jason Bourne. If you’re looking for a more in-depth look at the making at some of your favorite scenes, look no further than “The Athens Escape” – one of the many extras that can be found in the “Making Of Featurettes” section of our behind-the-scenes content. In this exclusive, you’ll learn all about the efforts that were put into making this scene one of the most memorable in the entire Bourne franchise.

Throughout the entirety of the series, Jason Bourne has found himself in many intense chases, but none quite like the Athens escape in Jason Bourne. Simon Crane, the second-unit director for the film, says “We’re trying to make a very grounded sequence and trying to put the audience within the action.” As you’re watching the movie, you’ll surely feel as if you’re riding on the back of Jason Bourne’s motorcycle as he’s steering his way through the streets of Athens. There are explosions going off; there’s police chasing after you; and there are a bunch of close-calls. Honestly, what more can you ask from a Bourne film? This is what the audience has come to expect from the franchise, but the people involved wanted to heighten the stakes even further.

While watching this featurette, you’ll see that not a lot of special effects were used while making this scene. So many movies nowadays rely on CGI to help enhance the overall experience, but the Jason Bourne crew thought it best to shoot everything practically. This means that everything you see on the screen was done in real-life. Director Paul Greengrass admits “that was part of selling the authentic Bourne experience.” Truth be told, Paul Greengrass is absolutely right. There really is no other film series that has the kind of grounded and intense action scenes that Bourne has.  Whether it be on foot, in a car, or on a motorcycle, the action is always sure to be an absolute blast to watch. 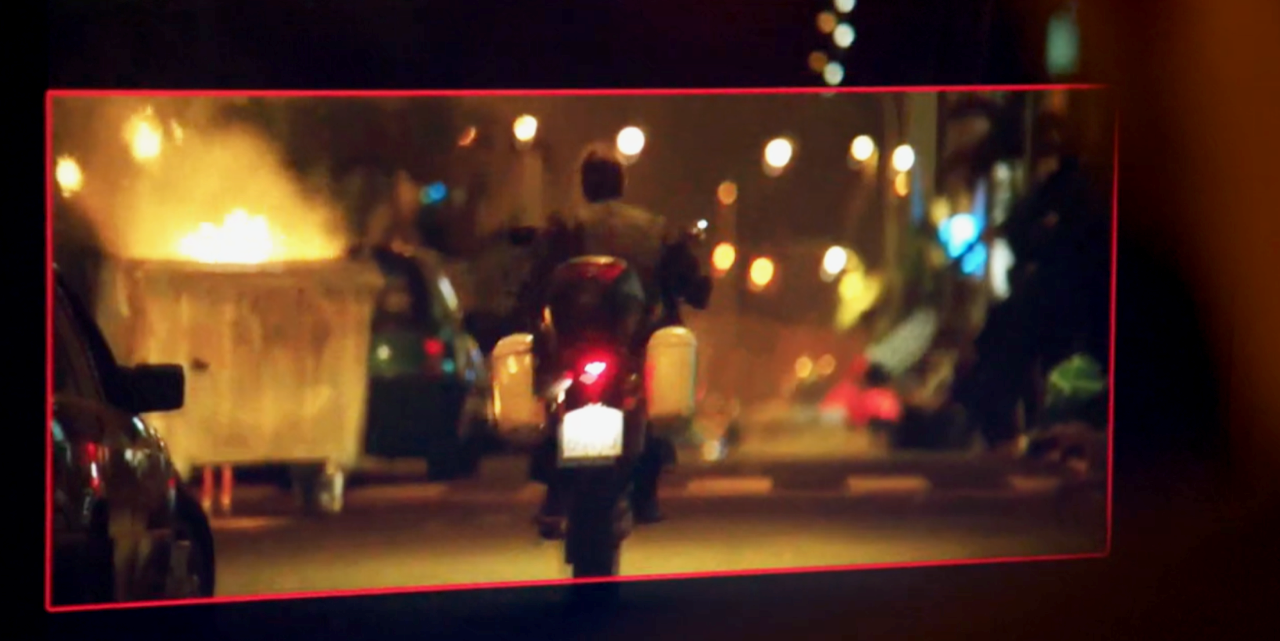 What also makes this scene so different from all the rest is that two people are riding the bike- Bourne and Nicky Parsons, played by Julia Stiles. The common off-road motorcycle is only suited for one rider; so, the crew had to make some crucial adjustments to the bike for it to accompany two people. Even though Matt Damon did most of the driving, the crew had a professional stunt driver perform more of the intense turns and pivots for the sequence. During the exclusive, you’ll see that Julia Stiles was also replaced by a specialist. This was to ensure that everyone was kept safe and able to continue with production as scheduled.

If you thought having two passengers on a bike swerving in and out of the streets of Athens wasn’t intense enough, then try having someone in a car chasing you while doing it. However, including a car in the chase was no easy task for the team. Just like what they did for the motorcycle, the crew had to make modifications to the car in order for it to be drivable for the film. As you will see in this extra, the car kept on stalling, so the people involved had to find a way for the vehicle to resume the chase with Jason Bourne.

Despite all these obstacles, the Jason Bourne team ultimately created a truly realistic and memorable chase scene. If you’re looking for more behind-the-scenes thrills, buy the movie on 4k Ultra HD, DVD, Digital, or Blu-rayTM*.

Like this article? Read more about the making of Jason Bourne here: