Jurassic Park left a gigantic footprint on Hollywood. Up until its release in 1993, no other movie was able to capture the curiosity and spectacle that came with having seemingly real-life dinosaurs on the big screen. With the unmatched directorial style of Steven Spielberg, pre-historic times were finally able to come back to life.

When the first Jurassic Park premiered to both critical and commercial success, it was almost a guarantee that a sequel would be made. Four years later, audiences all over the world were blown-away by The Lost World: Jurassic Park. To this day, this sequel is still considered a worthy successor to the first installment of the Jurassic franchise. There are many reasons as to why its popularity has survived for so long. If you’re hungry to know more about all the behind-the-scenes action of The Lost World: Jurassic Park, take a dino-sized bite out of the featurette, “Return to JURASSIC PARK: Something Survived” in our “Extras” section.

As you might have already known, the iconic tagline for The Lost World: Jurassic Park is “Something Has Survived.” If you were to look at this in the context of the movie itself, you might assume that the tagline is referring to the dinosaurs who survived after the events of the first Jurassic Park. This is true, of course, but when you look at the production, the tagline takes on a completely different meaning.

For instance, many of the techniques that were used to bring the dinosaurs back to life in the original were once again employed to create a similar effect. While you’re watching this Jurassic extra, you’ll see that the crew still used practical models for the dinosaurs to create a semblance of realism and authenticity to the reptiles of long ago. 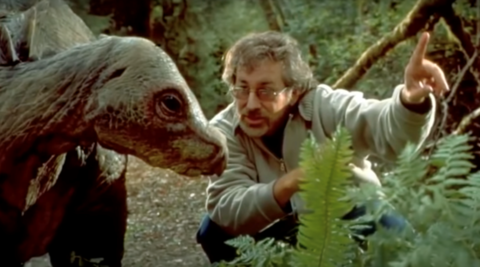 However, technology had greatly advanced since 1993, especially in terms of computer-generated effects. With these improvements, The Lost World: Jurassic Park team was able to blend practical and digital effects together. Steven Spielberg himself says that this mixture of techniques was a “great combination of Stan Winston and ILM in perfect balance and harmony with each other.” Now, you might be asking yourself, “Who was Stan Winston and what is ILM?”

Stan Winston is an acclaimed make-up effects creator that collaborated with Spielberg on the first and second Jurassic Park films. He was the mastermind behind all the dinosaur models, including the famous T-Rex and those ‘clever’ raptors. ILM, which stands for Industrial Light & Magic, is a motion picture visual effects company that was founded by none other than George Lucas (a close friend of Spielberg's and creator of Star Wars and Indiana Jones.) These efforts led The Lost World: Jurassic Park to being the perfect marriage between old and new forms of filmmaking. The effects blend seamlessly together, making it quite hard to differentiate between the two.

Further along in this The Lost World Jurassic Park featurette, you’ll see how these effects lent themselves to exciting and intense action sequences. One of the most memorable moments from the movie has to be when the T-Rex escaped from its containment and started wreaking havoc across San Diego. A set piece of this magnitude has a lot of moving parts involved – both literally and figuratively.

Some of the practical effects you’ll catch are all of the explosions and the cars being thrown by the T-Rex’s rampage. Speaking of which, the dinosaur, itself, is the product of special effects and rigging. From this scene alone, you can tell how much it took to bring these dinosaurs back from extinction and onto the island and the mainland. However, this isn’t the last time you’ll see dinosaurs invading different parts of the world. Be sure to see Jurassic World: Dominion in theaters this summer to see how pre-history comes back once again to disrupt the natural order.

Until then, get all caught up on the Jurassic Park franchise, and be sure to dig up even more about The Lost World: Jurassic Park when you buy the movie on DVD, Digital, or Blu-rayTM*.

Like this article? Read more about the making of The Lost World: Jurassic Park here: