Watch it On Demand
AT&T UverseCoxDirecTV CinemaDish On DemandOptimumSpectrumVerizon FiosXfinity
International action superstar Jean-Claude Van Damme teams with Raul Julia for a thrill-packed adventure on an epic scale from the screenwriter of Die-Hard, 48 HRS. and Commando. Based on the best-selling video game, the film hurtles beyond imagination with explosive action, humor and amazing special effects. Van Damme is Colonel Guile, the Allied Nations commando who leads an elite team of street fighters against the forces of the mad General M. Bison (Julia). Bison, who has hatched an evil plan for world domination, takes dozens of relief workers hostage and gives the world only 72 hours to respond to his twisted demands. In that time, Guile must find the captives and confront Bison in an electrifying battle for the fate of the free world. Featuring sizzling songs by Ice Cube and Hammer, Street Fighter is an exciting, no-holds-barred action film for the whole family. 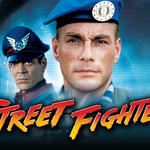 YOURS TO OWN
AmazonBarnes and NobleBest BuyF.Y.E.TargetWalmart
Release Date:
February 10, 2009
Number of Discs:
1
DVD
Close

YOURS TO OWN
AmazonBarnes and NobleBest BuyF.Y.E.TargetWalmart
Release Date:
February 10, 2009
Number of Discs:
1
Digital
Close