Return to JURASSIC PARK: Dawn of a New Era

Long before humans roamed the Earth, there were dinosaurs. These two species, however, never coexisted with one another, despite all the claims of them doing so. That all changed when Jurassic Park premiered all the way back in 1993.

For almost thirty years, moviegoing audiences have been able to see themselves walk amongst the dinosaurs for the very first time all thanks to this famed franchise. Having spawned five movies with a sixth, Jurassic World: Dominion, set to release in Summer 2022, dinosaurs have surely been brought back from extinction with the help of a little movie magic. If you’re a Jurassic fan, be sure to watch the featurette, “Return to JURASSIC PARK: Dawn of a New Era,” in our Jurassic Park “Extras” section. 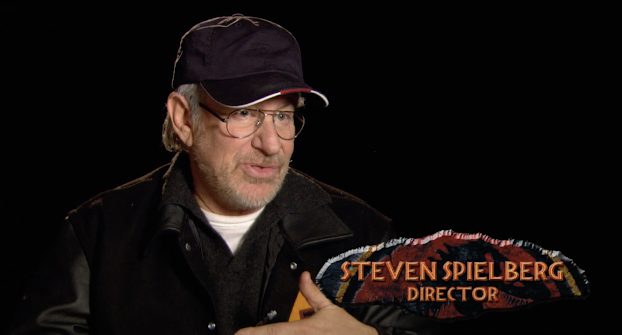 As you’ll see in this exclusive, bringing Jurassic Park to life wouldn't have been possible without the direction of Steven Spielberg (director of acclaimed films like Jaws and E.T.: The Extra Terrestrial.) It takes a true child-like imagination to helm such a project. Thankfully, that is the approach this acclaimed director took when signing on to Jurassic Park. Spielberg himself says “It was very important to me to be a kid directing Jurassic Park because...one of my first longest-words was ‘triceratops’.” All of us can probably remember playing around with our dinosaur toys as a kid or going to museums to see the fossils on display. Spielberg was able to take this juvenile curiosity and turn it into a reality for all the dinosaur-lovers in the world.

Jurassic Park, as you’ll find out during this extra, was adapted from a novel by author Michael Crichton. Crichton served as the film’s co-screenwriter and was heavily involved with the movie’s production from start to finish. Kathleen Kennedy, producer of Jurassic Park and current president of Lucas Film, says “Michael Crichton had come up with this spectacular notion that if you created a theme park where the DNA could recreate dinosaurs and you would have a place to keep them in an environment where people can feel safe just like with other wild animals in the jungle…It felt real. It felt extraordinary, and it had tremendous dramatic potential.” These sentiments that Kennedy described are surely carried over into the film. Even though the dinosaurs are shown on-screen, it’s almost like you can reach out your hand and touch one for yourself. That’s how authentic this movie felt back in 1993, and it still feels this way to this very day. 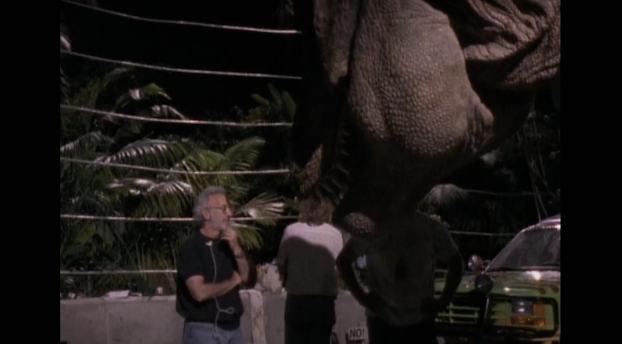 The dinosaur’s realism, for that matter, is credited to Stan Winston (special make-up effects creator.) Winston and his team created the models and animatronics for the dinosaurs in the film. Even though some shots include CGI, a lot of the takes contain some sort of a practical effect. For example, when Dr. Alan Grant (played by Sam Neil) lays on the stomach of the sick triceratops as it breathes, all of that is essentially real. An animatronic was made to mimic the likeness of what that kind of a dinosaur looked like during that period in time. Again, many of these scenes were not generated from a computer or were artificial in any particular manner. In a way, Spielberg and Crichton achieved exactly what they wanted to accomplish- bring dinosaurs back for the twentieth century and beyond.

There was so much research and work that was put into making Jurassic Park the classic that it is and will always be. Perhaps one day, there will be an actual park where dinosaurs can run and live free. Until that time comes, Jurassic Park will continue to capture the imaginations of both kids and adults for generations to come. Jurassic Park’s legacy lives on, and, as far as we’re concerned, it will never go extinct.

We only scratched the surface of what there is left to explore with these Jurassic Park features. If you want to learn more about this classic, be sure to buy the movie on DVD, Digital, or Blu-rayTM*.