In our exclusive Minions behind-the-scenes content, we included an interview with the Minions editorial team. This content gives you exclusive insight into how the Minions movie came together and became the final product that you see on screen. In animation, the editorial team takes the elements of the movie from animation to voice over to music and puts it all together in the correct order and with the correct cuts. This job has an immense amount of responsibility, and in our Minions extras, you can get a unique understanding of the job and what went into it for this unique and lighthearted film.

Claire Dodgson, the editor for Minions, speaks about a lot of different elements of the movie during her interview in our Minions featurette. She began her work with the first Despicable Me, and believes that a main charm factor in Illumination movies is the uniqueness of the art.  Speaking on behalf of the studio, Dodgson says, "The design and the lighting and textures and there's a lot of heart in our movies that I think makes them stand out from the rest."

As a member of the editorial team, Dodgson talks about the long process of making an animated film. Whereas a live action film might take a year or less, animated ones often take at least three years to make. She finds that it is easy to become bored during this time, or for the content to feel stale or old after a while. One main way that this movie avoided becoming stale is through the language.

Because the minions’ language is generally nonsense, she had to just assume what was being said or what emotion was being conveyed. In this Minions extra, she mentions that oftentimes she thought a scene was going one way when in fact it was completely different than anticipated once she had all the elements together.

Dodgson cites the minions’ footsteps as a key propeller of the storyline. Because minions have incredibly short legs, they have to do sort of a run, in order to get anywhere on pace with a normal character. This scurrying of feet, she said, is something that really set the rhythm and energy for the movie and helped to move it along. 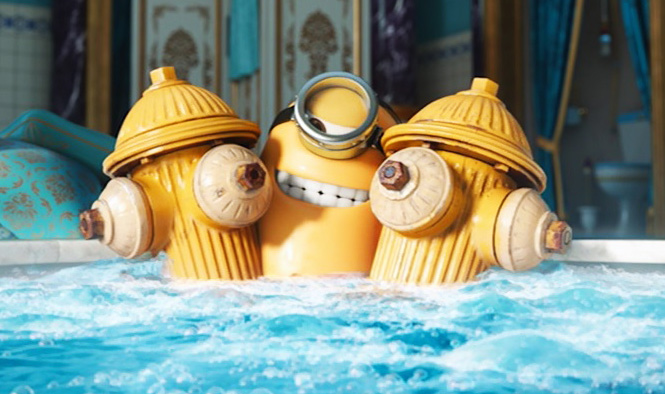 Claire Dodgson talks about some very cool Easter eggs inside Minions. There are places where the cast, crew, and production team worked in personal names and references. For example, Claire plays one of the yellow fire hydrants in the hot tub with Stuart, and Tiffany, the associate editor is the other fire hydrant. This information would be virtually undetectable without Dodgson’s exclusive interview, and these secrets often add significant depth to the viewing experience.

Though Dodgson worked on this film for three years, she still loves the minions and their “gusto.” She believes that the characters are lovable, and is proud that the story and the animation stayed fresh throughout the long production and editing period.

For access to more exclusive Minions content, including more information about the editorial process, purchase the movie on 4k Ultra HD, Blu-rayTM, DVD, or Digital.*