Us - Making Us Twice - article

"Tethered Together: Making Us Twice" Featurette

A lot more goes into making a movie than meets the eye. Though most of us have a concept of the fact that special effects, makeup, and editing all play into the final movie product, sometimes a well-made movie can make it difficult to tell the difference between reality and the story.

In our exclusive Us behind-the-scenes videos, you can learn about how Us came to life on screen. There is a lot of complicated cinematography at play in this film and understanding some of the logistics can help you to appreciate the movie even more. In the Us extras, viewers can watch the featurette entitled “Tethered Together: Making Us Twice.” 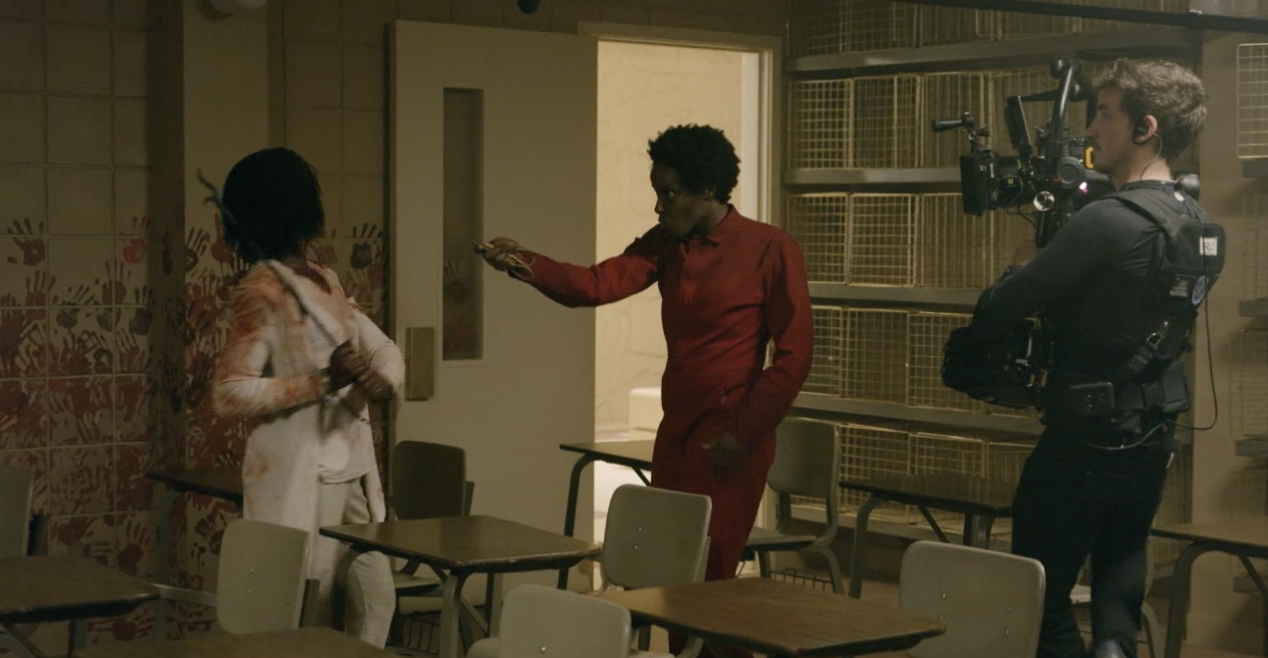 This featurette gives an inside look into the intricacies of making a film in which the same actor has to play two different roles. In this Us featurette, you will see that Jordan Peele and the rest of the production crew had to get creative about how to create a convincing world when half of the characters were not there during each take. Though this has been done before, Peele and his team took the practice to another level to create the kind of movie that audiences have never seen before.

In this Us featurette, Lupita Nyong’o describes the feeling of acting opposite a character that isn’t there. Because each actor played their own evil counterpart, they had stunt doubles read/stand in for the other character while they filmed each scene. This proved to be difficult, because a lot of acting is energy and collaboration. Without someone to work against, it is difficult to gauge how to deliver a line or tweak a facial expression.

Considering that the actors were playing two roles, Nyong’o comments, "The challenge was which side to shoot first." Nyong’o ultimately decided that playing the more intense character before playing the more responsive character really helped her to gauge her responses and act accordingly. Though it was a challenge, the cast and crew agreed that it was an overall fun task, and they obviously pulled it off very successfully. Doing each scene multiple times from different perspectives stretched the actors and allowed them to explore their roles more completely.

We learn how much props and makeup played into the success of the film. For example, the props department had to develop a way to put bloodstains on the carpet in a way that could be completely removed for the scenes in which the villains were not present. Each scene had to be filmed twice, once for the protagonists and once for their evil alternates. The props and makeup department were charged with ensuring that the actors and the scene looked pristine at the beginning of each filming day, regardless of what had happened on set the day before.

Us is a complex movie in a variety of ways. From the acting to the cinematography to the story, there are many nooks and crannies of this production that are fun to explore. Whether you are a movie buff, or simply stan Jordan Peele, our exclusive Us features are sure to help you appreciate the movie even more. To access these extras, purchase the movie on 4k Ultra HD, Blu-rayTM, DVD, or Digital.*

Like this article? Read more about the making of Us here: